Over the last few weeks, we've been working on many new features and enhancements in Forge. I often tweet about these changes since they don’t warrant a full-blown blog post by themselves, but that means that they're also missed by a lot of our users!

So, let's take a look at some of the recent additions to Forge and what they can do for you.

Starting today, TLS v1.3 is enabled on all newly created sites running on servers provisioned with Ubuntu 20.04. Older servers will continue to use v1.1 and v1.2, but not enable v1.3.

You can learn more about TLS v1.3 and what it means here.

You can now select all of your active servers with one-click when running a recipe. Previously, you'd need to individually select each server which could be annoying when you have tens of servers that you need to run the recipe on.

You can now enable or disable wildcard sub-domains after you've created a site. Until now, you would need to delete the site and re-create it with the right option selected. This is particularly useful for those times when you forget to select the right option.

For added security, Forge will never publicly open Redis' 6379 port, but if you need to do so, you can now secure your installation with a password.

Firewalls do more than just blocking requests, they can also selectively allow requests. You can now select whether to allow or deny requests in your firewall rules.

When creating a new rule, you can now select to "Allow" or "Deny" the request.

A good example of this would be to allow another server to connect to an existing Redis server. You can create an "Allow" rule that only accepts requests to 6379 from a known IP address. When combined with the Redis password from above, you can create flexible yet secure installations.

Choosing a password is hard at the best of times, choosing a secure one is harder still — that's why we use a password manager, right? Forge now displays a password generator button next to any password field. It'll quickly generate a random password for you to use.

This was one of the most requested features since we first introduced Database Backups back in February! You're now able to both view and edit an existing backup configuration within the Forge dashboard. 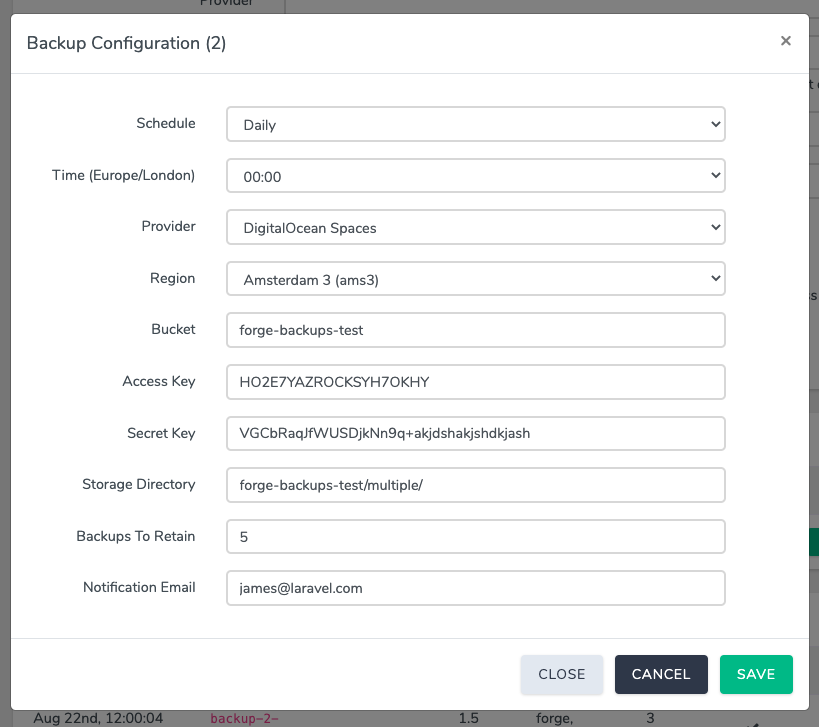 Backup Multiple Databases At Once

Alongside editing backups, we also received many requests to backup multiple databases at once. The ability to do so was actually part of the initial feature, but we didn't have a good way of restoring individual databases — which we do now!

You can now select multiple databases when configuring your database backup.

If you don’t have a Forge account, now is a great time to sign up. Forge allows you to painlessly create and manage PHP servers which include MySQL, Redis, Memcached, database backups, and everything else you need to run robust, modern Laravel applications.